Meaningful Use of Patient-Generated Health Data

This week the NPRM for Meaningful Use 3 was made available in "unpublished" form on the Federal Register site. It seems that one of of the primary aims for MU 3 is to streamline the set of objectives applicable to eligible providers (EPs), eligible hospitals (EHs) and critical access hospitals (CAHs).

The new item most interesting to me is Objective 6: Coordination of Care through Patient Engagement (starts on page 103 of the linked document).

This proposed objective aims to "Use communications functions of certified EHR technology to engage with patients or their authorized representatives about the patient's care" and employs three measures:

Measure 1: >25% of all unique patients "actively engage with the electronic health record made accessible by the provider" either by 1) viewing, downloading or transmitting to a third party their health information; or 2) "access[ing] their health information through the use of an ONC-certified API that can be used by third-party applications or devices."

I've previously discussed the Argonaut Project Implementation Program and its relation to the SMART on FHIR project. The FHIR APIs and added functionality of the SMART project (OAuth, OpenID) will dramatically lower the barrier for third-parties to easily add functionality and significant value to current EHRs. While these APIs are already enjoying broad support even before they are complete, seeing this emphasized in the MU 3 NPRM is a testament to their importance.

It's critically important that we encourage direct engagement and interaction between patients and providers, and this measure intends to do just that.

Measure 3: "Patient-generated health data or data from a non-clinical setting is incorporated into the certified EHR technology for more than 15 percent of all unique patients."

This is exciting. While patient-generated data can come in many forms, including manual entry by patients, this measure will only be achievable if we employ technologies that reduce or remove such barriers. Apple's HealthKit is by far the easiest-to-deploy tool to facilitate this data handoff currently, and it's available right now. We're hopeful an Android-equivalent will be available soon for patients with those devices (Google Fit doesn't yet ... fit that purpose).

Neither SMART on FHIR nor HealthKit are yet widely deployed or adopted, but these technologies will undoubtedly be critical to ushering in the learning health system, and it's great to see APIs and patient-generated data being emphasized in the latest NPRM.

2015-03-24 UPDATE: Just to make sure this is clear, MU 3 is still draft at this stage, and the content is subject to change. Also, attestation for objective 6 will require meeting only 2 of 3 of the measures listed above.
Posted by Ricky at 11:33 PM No comments:

ResearchKit is exciting, as I've already noted. Apple has posted some additional information in the form of a Technical Overview document. This document publicly sheds a little more light on what ResearchKit will enable.

ResearchKit provides a standardized interface to quickly build surveys. These modules are already localized. This would work for the majority of current research use cases.

One of the most significant inclusions is native informed consent capability, as you may have seen in the keynote:
This is something many researchers have been scrambling to buy, create or produce since it's not currently a common feature of modern EHRs. The fact that this is now available out of the box and in open source form is compelling. The informed consent mechanism is flexible and takes into account the use of waivers, use of institution-specific ethics language, and also provides the ability to insert comprehension tests ensure the patient has capacity to sign. The consent framework then generates a PDF for upload or email.

As demonstrated in the video today during the keynote, ResearchKit provides the ability to capture patient interactions which Apple calls "Active Tasks." The Active Task modules currently available in ResearchKit include:
All of these are accomplished using hardware built-in to the phone itself.

Probably the most significant innovation here, however, is the fact that this is all (or will be soon) open source. For this to succeed and expand, it's vitally important that academic medical centers keep this in mind when developing their apps, and that they choose to share the source of their own apps so other researchers can build on their foundation. This collaboration will be the key to accelerating the transition to a Learning Health System.
Posted by Ricky at 4:27 PM No comments:

ResearchKit and the Future of Healthcare 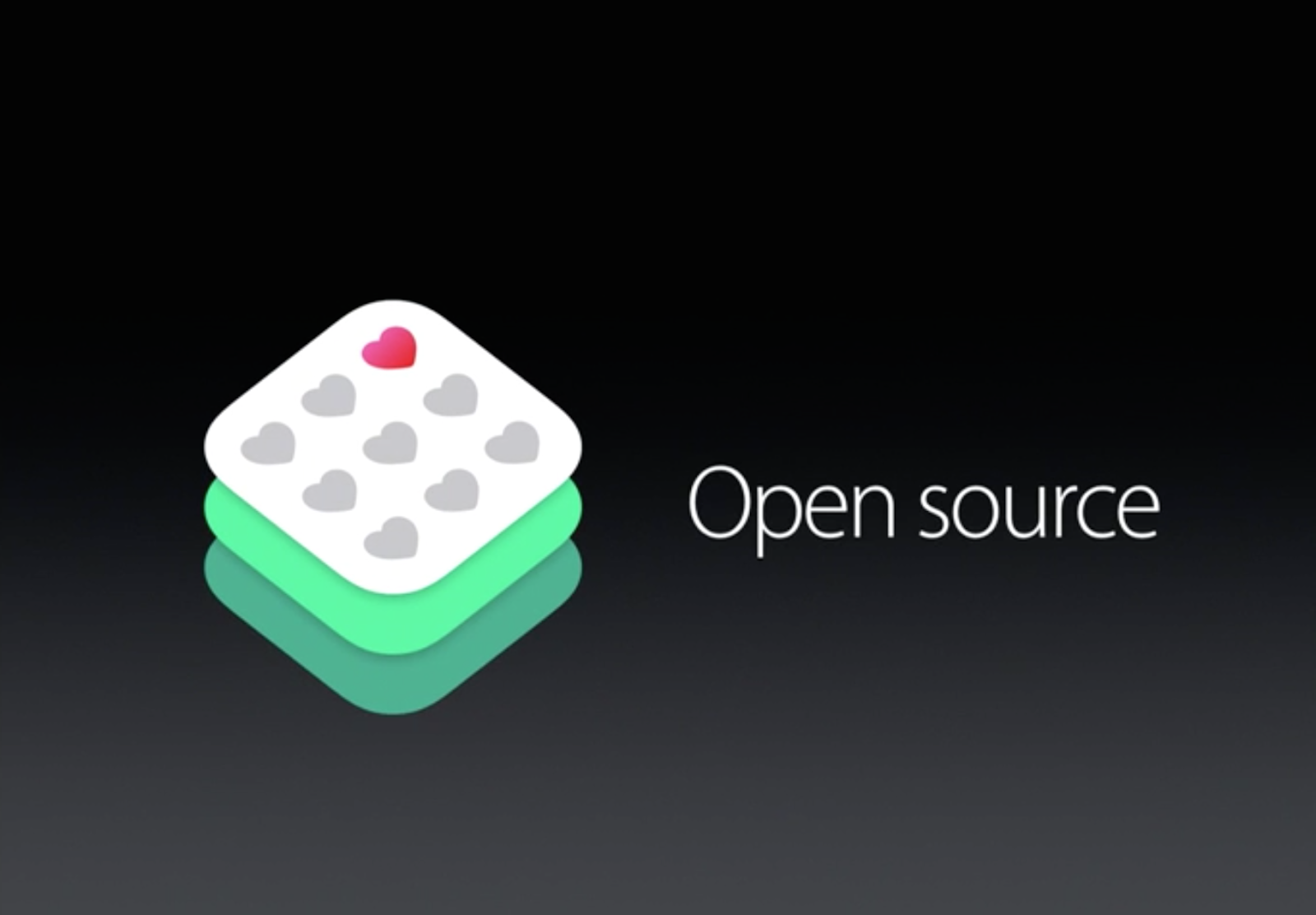 Yes, ResearchKit is fully open source. Why is that important? Because it means that this technology will eventually be available on any platform. Yup, including Android. And Windows. And whatever else comes in the future.

And it also means that integration between ResearchKit and other emerging healthcare technologies will be possible, including the SMART on FHIR platform, which is leading the way to modernize healthcare interoperability.

Given Apple's commitment to privacy, I have no doubt that the healthcare industry will quickly adopt this new platform, as evidenced by the high-quality institutions already participating.

As I've mentioned previously, the Learning Health System represents the vision of a world in which we are constantly learning from a stream of high-quality data, using that data to quickly make even better decisions, even at the point of care. ResearchKit will help us reach that goal even more quickly, possibly even before the 10-year goal as set forth by the ONC.

Let's get started!
Posted by Ricky at 1:47 PM No comments:

The Why of Wearables

Ten years from now, 2015 may well go down as the Year of the Wearable. Activity trackers are plentiful and accurate (including those built-in to your phone), Android Wear devices are now becoming more refined, the Pebble will see its first substantial upgrade (including 10-day battery life), and, of course, the Watch will launch next month after additional details are revealed later today.

So why have these technologies recently become interesting and relevant? Did some Silicon Valley innovator simply decide that we needed more technology on our wrists (and *POOF*! VC funding suddenly made it happen)?

Of course not. The truth is actually far more interesting, and, when properly understood, is the lens through which we can peer into the future.

Time for a history lesson ...

My grandfather worked on the UNIVAC computer during his time in the Army at Ft. Meade, MD in the 1950s. It was large (and the battery life was really bad...). This is an example of a UNIVAC system that was used by the Navy:
At this nascent point in computing history, could anyone have envisioned a device that's orders of magnitude more powerful, yet small enough to fit on your wrist? Perhaps (see #11). But truth is stranger than (science) fiction, and the reality is that in the realm of personal computing we've easily surpassed even the most fantastic futuristic visions of the 1950s.

The invention and subsequent miniaturization of the transistor have accounted for this success, which has followed a trajectory known as Moore's Law, which I won't rehash here. Some have warned that Moore's Law is coming to an end, at least via silicon. I wouldn't be so quick to throw in the towel. The progress is staggering (note a version of the UNIVAC at the bottom):
This dramatic miniaturization allowed my family to purchase its first desktop computer in the early 1990s - a Packard Bell with a 66MHz AMD chip inside. I have such fond memories playing Myst with my dad. I had a desktop in college as well (this time a Dell with a 450MHz Pentium II), and it wasn't until I started medical school in 2004 that I owned my first laptop, a sturdy IBM Thinkpad.

This miniaturization continued and I bought my first iPod touch in 2009 to use as a test device while I was teaching myself to write iOS apps in residency. This was followed by an iPad in 2010 (the day they were released, although I should note that the iPad was most certainly not the first tablet computer on the market), and then pretty much every iPhone since then (I now use an iPhone 6 Plus - the first iPhone that actually fits my hands). My first "smart watch" came in the form of the Pebble in 2013, and I've since used a plethora of other gizmos and gadgets that would fall in the "wearables" category.

Computers have continued to progress towards smaller and faster devices, and as they've done so, new applications for that technology have inevitably been the result. "Wearables" are simply the next step in that logical progression.

So don't be surprised as these devices start to pop up in ever smaller and more discrete places, such as the buttons on your shirt, woven into your socks (you gotta know how much your feet are sweating!), mixed with your food, in your medicine ...

If we've learned anything from the past, it's that this progression is inevitable, and that it will only exceed our expectations and our wildest futurist fantasies.

With respect to his latest creation, Jony Ive seems to agree: "It’s technology worn on the wrist. I sensed there was an inevitability to it."

Despite this predicable inevitability, the future will still hold plenty of surprises. And I suppose that's the best prediction of them all.
Posted by Ricky at 12:50 PM 1 comment: