Duke's on FHIR (for real this time)!

In June I described our work to date on integrating the SMART and FHIR APIs into our Epic-based EHR.

As a recap, we started this process in 2014 with a custom Android app that pulled patient problems, medications and demographics directly from the EHR via simple REST-based APIs. As we became more familiar with SMART and FHIR, we realized the value in joining forces with a common standard. It was never our intention to create something that would only be useful to us, and it was clear that the momentum around FHIR was building.

Fast-forward to January 2015, when we had our first SMART apps running in our proof-of-concept environment. It could be done! We followed this with integration of several additional apps and a demo at HIMSS in Chicago. You've seen this before:

This was all fine and dandy, but it was still all in our proof-of-concept system with "fake" patient data.

Since that time our amazing development team, led by Felipe Polo-Wood, has been diligently working to move this infrastructure into our production environment, an important milestone in order to show that SMART and FHIR can do more than just play in the sandbox.

I'm happy to report that as of August 26, 2015, the infrastructure has been live for some Duke-specific internal use-cases. In fact, Felipe was so excited to share that I had a screenshot waiting in my inbox that morning, demonstrating that the systems were, indeed, calling the FHIR APIs, and that the transition was seamless from the outdated infrastructure FHIR was intended to replace: 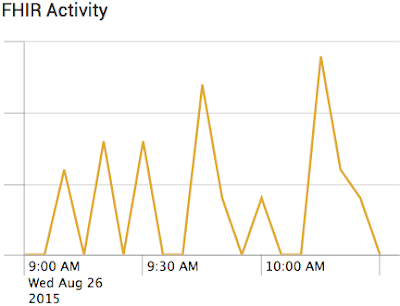 Duke was officially on FHIR!

But not ones to rest on their laurels, the team immediately got to work to enable a more visible example of what FHIR can do: a true SMART-compatible app, Pediatric Growth Chart.

And, of course, the best is yet to come!

Kudos to Felipe and the rest of the incredible CATS development team for making this happen. It has truly been a team effort, and I know they share the same enthusiasm for this project as I do, because they're always smiling!