iPhone 7 and the Case of the Frustrated Consumer

So you've probably heard by now that the iPhone 7 was announced on Wednesday. According to most outlets (and Apple themselves), it's an evolutionary upgrade. Yet, there has been palpable disappointment from many corners of the internet that this version bump didn't follow the traditional "tick tock" cycle of "major upgrade" (i.e., when the version number changed) followed by "speed upgrade" (with the addition of the "S," a tradition harking back to the iPhone 3GS introduced in 2009).

Something has been bothering me about this disappointment, and not in an "Apple Fanboy (or girl)" kind of way. I usually get my best insights while monotonously swimming laps in the mornings, and today was no exception. I was struck by this obvious thought: the majority of consumers (and the media, and Wall Street) - perhaps unconsciously - judge the novelty of new products primarily based on its aesthetic appearance. Beauty is only skin deep. Perhaps there's a greater lesson there for society, but that's not the point of this post ...

But that's not all. The problem with that thought as it relates to the iPhone (and smartphones in general) has to do with Apple's general design philosophy of "form follows function." In other words, the product will be designed with the singular purpose of enabling it to function at the highest level for its intended use.

When it comes to the iPhone, this largely seems to be a solved problem. How much has the iPhone design truly changed since its introduction in 2007? 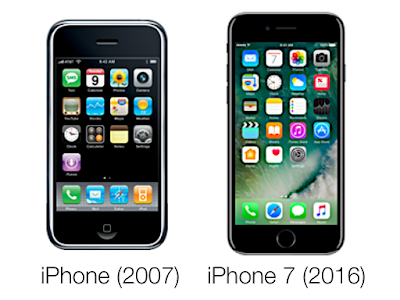 There's a screen, a home button, speaker(s), volume buttons, a power button, a mute switch. It's obvious that despite the marketing and the version numbers and the minor cosmetic tweaks, the most significant changes have always been related to internal components. Every time. Just take a look at the major advertised features of each release:

Throughout all those upgrades, has the design truly changed? If you count moving from rounded edges to squared edges (then chamfered edges) to rounded edges again, yeah, a bit. I guess (if I squint).

So why hasn't there been the revolutionary design change the people are clamoring for (and constantly disappointed when it doesn't materialize)?

Because it's not necessary.

The minor design updates have had no noticeable impact on how people use the phone. Changes in usage have all been driven by the internal upgrades noted above (I count the screen and buttons as internal - the design is the same).

The basic design is already nearly optimal for the device's intended usage. For more proof, look no further than the competition. Since the original iPhone was released in 2007, smartphone designs in general have converged on the standard Apple pioneered: a screen and a button.


So should Apple change the design of the iPhone simply for the sake of change? This seems to be what the public is expecting. Hence their disappointment.

Yet Apple, through Jony Ive's disembodied voice, continues to make it clear that the design evolution (rather than revolution) is quite intentional:


"We have created a product that is the most deliberate evolution of our original founding design." "Our obsession remains to continuously simplify and improve." "iPhone 7 is the most singular, the most evolved representation of this design."

Understanding this is the key to unlocking the future of the iPhone. Do I expect the next iPhone to be the big design revolution people are expecting? Of course not. Do I expect some pretty cool internal changes that might cause me to rethink how I use the device? Absolutely.

In the end, Apple's courage to challenge these consumer expectations is probably the most revolutionary thing of all.

The views contained within this post are my own and do not reflect the views of my employer. Furthermore, I have no financial interest in Apple whatsoever.
Posted by Ricky at 10:24 AM